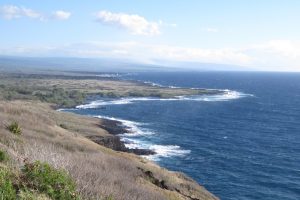 Ka’u is Hawaii Island’s southernmost region that features the small communities of Na’alehu and Pahala and is home to Hawaii Volcanoes National Park and Kilauea, one of the world’s most active volcanoes.

Other sights in Ka’u include KaLae, known as South Point, the southernmost point in the United States. Punaluu Black Sand Beach is one of Hawaii’s most well-known black sand beaches. And in the upcountry Ka’u Desert within the boundaries of Hawaii Volcanoes National Park you’ll find footprints of long-ago warriors trapped in volcanic ash, a result of one of Kilauea’s rare explosive eruptions. Here taxing trails crisscross the land, from the mountains to the sea, tempting backpackers and hikers.

In contrast, on the eastern slopes of Ka’u, there are macadamia nut orchards, coffee farms and cattle. Wood Valley, near Pahala, is a place for meditation and respite from the outside world. No wonder Ka’u is home to not only Hawaiian families who have been here for generations, but also writers, artists, philosophers and others seeking solitude. Explore beyond Kilauea and get off the beaten path in Ka’u.